The Hypomeeting Götzis is THE heptathlon and decathlon meeting in the world. Its history comprises three world records (Daley Thompson 1980, 1982 and Roman Šebrle 2001).

Emotional ties grew when I received an Email in August. My picture of the vice World Champion Brianne Theisen-Eaton had been nominated as a candidate for the 2016 poster subject. Two months  later I received brilliant news. My picture had won the competition! Expectations high, I traveled to Austria and found this: 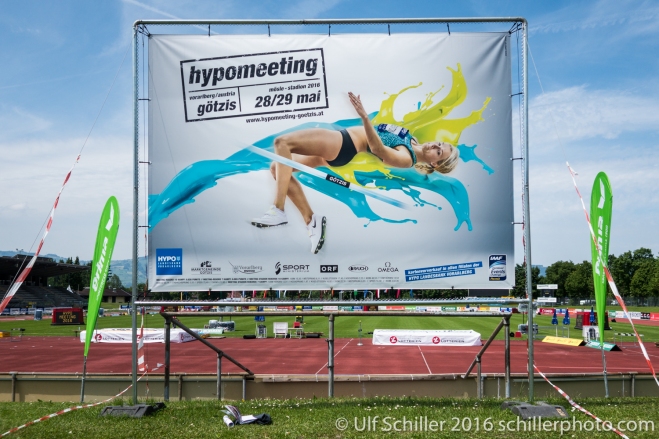 I was looking forward to shoot Brianne again, but in Götzis you are under constant pressure not to miss any of the many other superstars. So here are my anecdotes.

The winner of 2014 is considered as one of the shooting stars in the heptathlon. The 23 years-young Liverpudlian was interviewed at the welcome reception, but the interviewer despaired of her strong accent, very much to the amusement of the folks. Like the other athletes, she was asked about her goals for the upcoming competition. Pleaded to answer slowly, her reply was short: “six-thou-sand-two-hun-dret points” (this is the Olympic Standard). The crowd was shaken with laughter.

Overall, she seems to be a very delightful person. Nobody ever had doubt that she would reach her “goal” (her PB is 6’682 points, this makes her a medal candidate at the Olympics). Her performance was surprisingly erratic. PB over the 100m Hurdles, PB over 200m, strong as usual in the high jump, but a little woeful in the shot put, the long jump, and with the javelin. 6’304 points and rank Six.

His goal: “A valid attempt in the shot put” – the Canadian gave this reply because of his three fouls in 2015 where he was in great form. He was the top favourite and had an incredible start: 10.15 seconds over 100m and a Decathlon World Best!

Surprisingly, he was under constant pressure for the rest of the competition. First, the fabulous high jumper Jeremy Taiwo took over the lead after stunning 2.18m. Damian’s answer was “only” 2.00m, but in high jump, this difference translates to 173 points.

In the 400m, Damian re-assumed the leader position, despite of getting beaten by the German Kai Kazmirek. He extended his lead over the 110m Hurdles, but all these disciplines were a little weaker than people expected, given his base speed.

Then, the strong disciplines of Kevin Mayer followed. The Frenchman has a strong second day finishing 1st in the diskus throw, and 2nd in the pole vault and javelin throw.

The overall standing was close, but Damian was in the lead. He knew that if he marked Mayer over the 1500m and beat him on the final straight he would be the overall winner. And this was exactly the tactic. In the end, Damian secured is second victory in Götzis with 8’523 points. 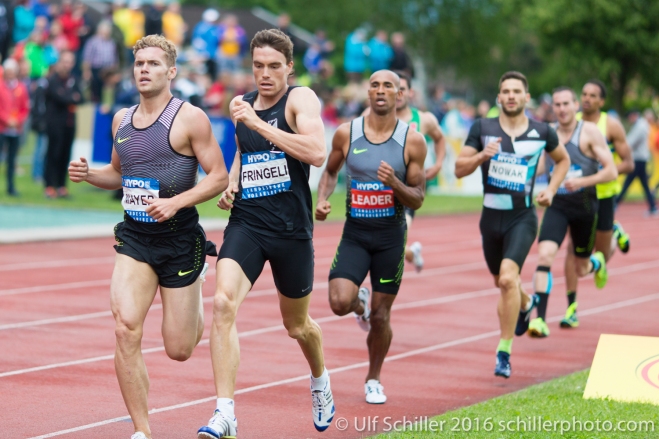 The winner of 2015 had justone goal. Finishing as one of the best three Germans. Germany traditionally has many strong decathletes and the qualification rules for the Olympics were that the best three of Götzis and the meeting in Ratingen would be selected.

In the opening discipline, Kai could not know that his German competitors would all drop out. On the first day, Kai finished only 7 points short of Warner, after winning the 400m. Nobody goes deeper into the lactic acid than he does – I remembered this from the year before. Here are two shots from the 400m – one during and one after the race. 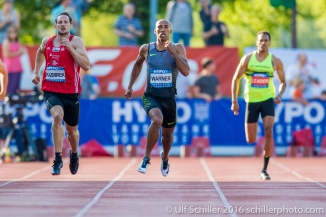 The second day was difficult due to the changing weather conditions. Pole vault was interrupted twice due to heavy rain. Kai was affected most by these complications since he didn’t drop out before the rain (like most of the others), but also did not enter the competition after the rain (like a few of the others).

Eventually, he finished with 8’318 points and is now in a top position regarding the German Olympia qualification.

Dominik Diestelberger’s role in Götzis is special. Götzis is his home competition and he is under constant monitoring by the home TV station ORF. Covering the event extensively, the ORF follows every of his moves. He seems to accept this role. You learn that athletes are great personalities when they lose! I admired his professional interviews after a quite disappointing performance in the year before. 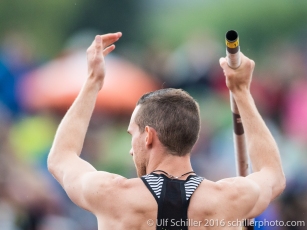 Not so 2016! 8’100 points are the Olympic Standard. Dominik firmly announced this as his goal. And he performed well. Setting up a new PB he finished fifth in the overall ranking and achieved 6’175 points. Good for the spectators? Good for the ORF! Good for Austria! Good for the Hypomeeting!

Aah, I should not forget my photo subject! With the World Champion Jessica Ennis-Hill absent, Brianne was the top favourite. She opened the event with a strong 12.93 over the hurdles and never left a doubt who would be the winner. One of the must shots was to repeat my 2015 picture. I was pleased with the result. Photography geeks will also notice the technical progress. The 2016 shot was with the 135mm F2 lens and the background got blurred.

On day two, Brianne went straight towards the victory. This included an improvement with the javelin. Whoever wants to win Gold at the Olympics must beat her. And – this will be difficult.

Swiss athletes are traditionally invited to the meeting. Caroline Agnou, the 2015 European U20 champion, had a difficult start into the season with injuries. Struggling to find her form, it was important that she completed the heptathlon.

Michelle Zeltner had a brilliant indoor season, so it was thrilling what she would deliver in her first important heptathlon after a long injury break. The start was good, especially her 200m run. Unfortunately, her hip injury started hurting again which made it impossible to achieve a better overall result. 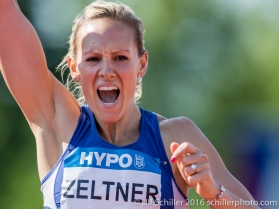 Jan Deuber who did a good decathlon in 2015 was re-invited. An early injury made it impossible to complete the decathlon. He gave up after the high jump.

Jonas Fringeli was very strong. His decathlon was without weaknesses. The result was 7’862 points – a new PB and the standard for the Euro Championships in Amsterdam! Will he join the 8000-club later in the season? The same decathon plus one positive surprise and this seems possible.

Finally, there was Ellen Sprunger’s comeback after two surgeries. The intentions of the double Swiss athlete of the year (2012/13) were clear: new PB and the Olympic Standard.

Given the long injury break and the short preparation time, experts knew that this would be like an Eiger Northface climb.  Ellen’s start was brilliant, though. Close to her PBs over the hurdles and in the 200m run, and with solid performances in the shot put and the high jump, everything seemed possible after day one. 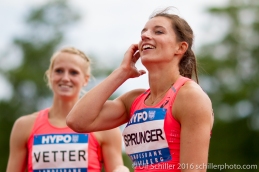 “Tomorrow will be a very important day”, was her short comment after a convincing day 1. Would she be able to use her speed for a PB in the long jump? Odds were against this, because she did only one long jump competition in the preparation period. Well, miracles are called miracles because they are rare. 5.95m were OK, given that almost all other athletes struggled on that day, too. However, this was not what she needed to build up a safety cushion.

Ellen now needed 44m in the javelin and a 2:12 over 800m – both extremely difficult. The javelin stopped her. Her elbow was not ready to throw that far. It was sad to see her standing in the rain, the eventual failure sinking into her mind.

Despite of not reaching her goal, Ellen was impressive. After getting over her disappointment, there are good reasons to continue her work and prepare for the rest of the season. There’s more to come than pouring rain.

The Berner Rundfahrt is a UCI 1.2 race just next to my house door. Of course, I wanted to shoot this. Besides the men’s pro race there were other events, a national women’s race, a U17 race, an amateur race and, the hobby races. I had to skip the hobby races for personal reasons, and just covered the pros and amateurs.

One lap of the course is 34km long. The toughest part is climbing the Frienisberg, a 12 percent ramp. Nothing for sprinters and heavy rouleurs.

I selected several shooting positions starting a few meters behind my house and ending at the finish line. Enjoy the gallery.

After the indoor season and the Swiss 10k road running championships my cameras got a little rusty, but where should I shoot? Sure there were events on every weekend, but… spring 2016 isn’t really that inviting. As no must-events were around, I preferred to let my gear rust.

Then came the Zurich Marathon. This event is big. So I decided to go. The race promised to be interesting. Three Swiss runners tried to qualify for the Olympics: Adrian Lehmann who was in great shape according to his test races, Julien Lyon whom I already met when he won the 10k Nationals and who ran his first marathon, and Michael Ott.

Adrian wanted the qualification badly. He tried everything. Turned professional, changed his entire life, went to Kenya, brought two pacemakers with him from Kenya.

However, not only the Swiss runners were of interest. Quite a lot of superbe African runners lined up. Moreover, there was the favourite: Yuki Kawauchi from Japan who is a superstar at home. In the women’s race there were Yoshiko Sakamoto, and the German Katharina Heinig who aimed at the Olympic Standard too.

Very shortly after the start, the weather forecast proved terribly wrong. First, it started to rain… then hail… then snow. Conditions became extremely ugly. If you never ran in such conditions: the hail hurts. The snowflakes stay on your skin and melt. Your system cools down and you start freezing. Freezing costs energy. Loss of energy is detrimental to Marathon performance. There is nothing you can do against it.

Well, top athletes are top because they stay focused even in bad conditions. Even Adrian’s pacemakers who had never seen snow in their life before continued fighting. However, determination is one thing, the physics behind the wet and super cold conditions another. The lost energy quickly makes you even freeze more.

Way too early, Adrian’s pacemakers had to give up. They weren’t to blame. One was even taken to hospital with hypothermia. Adrian lost contact to Julien who adapted to the conditions a bit better. However, both did not maintain their pace at the desired level.

What about the international athletes? Only ONE African made it to the finish line, second ranked Abere Belay from Ethiopia.

The glorious winner was Kawauchi. This guy is iron tough. He ran the entire race at the front, from the start to the finish line.

Impressive how Kawauchi sprinted down the finsh straight. Like an 800m runner he crossed the line and stopped for the photographers, breathing heavily.

So what about the young Swiss runners? Julien did a great job. A third rank and 2:16 in his first marathon under these conditions are simply super. Great to see his joy.

And then the drama started. Everyone was waiting for Adrian. Time was running adn running and everyone knew, he’d be utterly disappointed. A young runner did everything right to fulfil his dream, but the very two hours of the event destroyed his hopes. Face swollen, his look empty he came down the long finish straight. What a bitter moment.

So how did the Women’s competition end? All the favourites had to give up. The winner was the toughest in the field, Daniela Aeschbacher. She said she couldn’t believe it. She just had to run back to Zurich, despite of the bad conditions, because her family was waiting. Suddenly a bike appeared besides her with the sign “first woman”. And she was winner of the Zurich Marathon. Sometimes life writes really nice stories.

Naturally, joy was great. Even minutes after the finish, she could not believe it. But all photographers were hunting her. Yes, it was true. 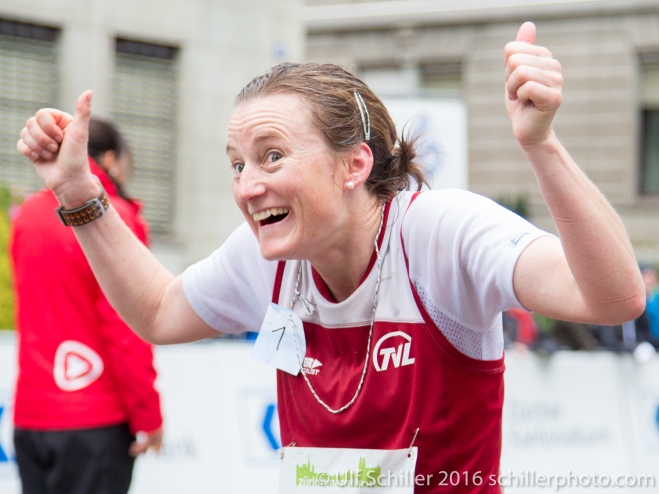