I followed the entire Swiss Volleyball season as a photographer. The result was a 13th title for Voléro Zürich. Business as usual? Not really. Different from previous years, Voléro lost against three other clubs during the regular season, and in the final  Sm’Aesch-Pfeffingen literally pushed the champion to the limits. 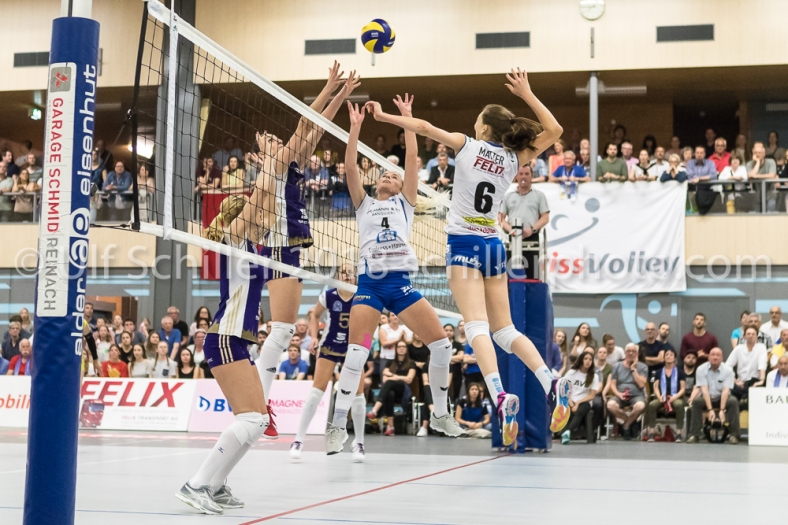 This blog reflects the season from my point of view. I base my thoughts on my current knowledge. Admittedly, a lot more was going on. So please forgive me my maybe biased view.

Volleyball is a micro cosmos. It lives in a bubble. Match reports use to appear just in the local media, or they are published by private persons/institutions on social media. Professional national media just appear at two events: the Cup Final and the Championship Final.

Does the sport deserve this? The immediate response is no. Volleyball is fast and exciting, and the Swiss level is very good: The better teams easily survived the first rounds of the European competitions. Most of them reached the quarterfinals. This is really, really good.

However, there is a second thought. Maybe Volleyball deserves the low attention. So what’s going wrong? Before I answer this, let me enumerate some facts. 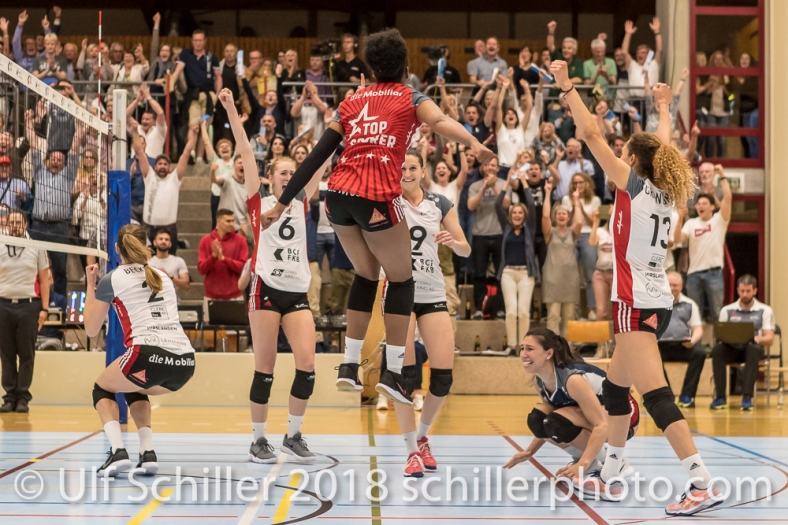 Volley Düdingen is one of the second-tier clubs with a strong local support. The entire town loves their “Powercats”. 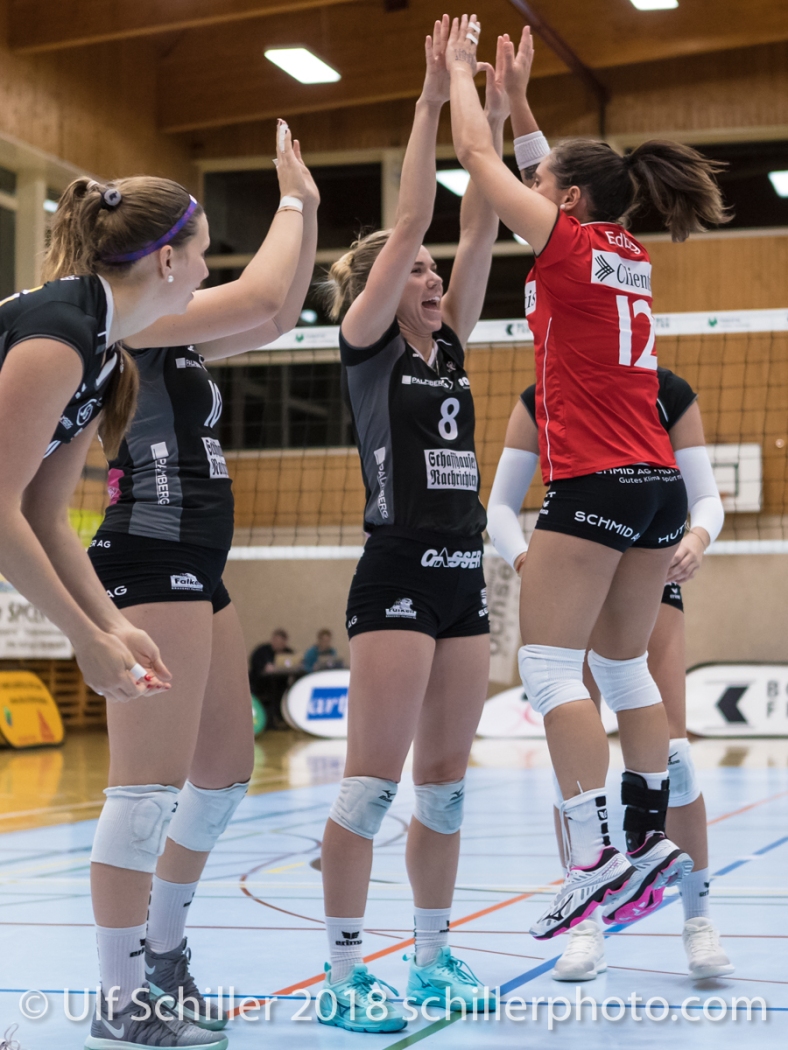 Kanti Schaffhausen: another club that has a lot of local support

Neuchatel University Club (NUC) made it to the cup final. Their spectators are like a wall behind the team

The card house effect seems to be the major short-run problem. For 2018/19 there are two empty NLA slots. So far there has been no announcement who will promote, despite of the end of the NLB season. Does this mean the NLA will have just eight clubs in 2018/19? 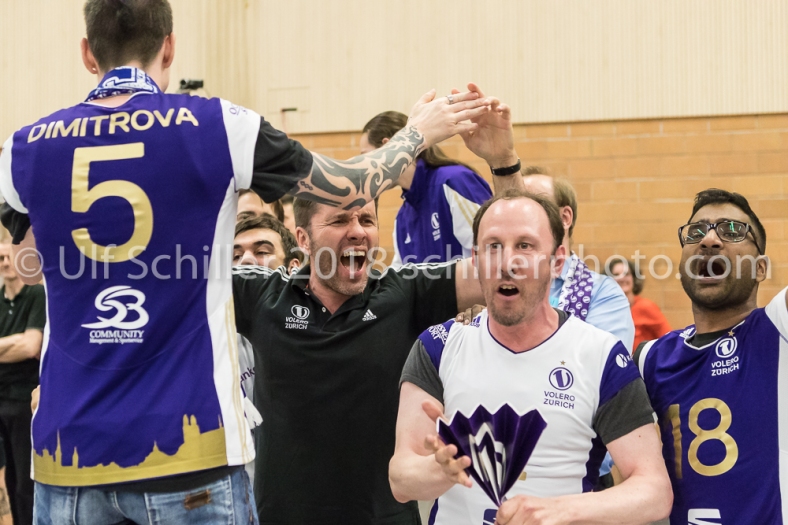 The money man behind Voléro. Stav Jacobi has enough of the Swiss league and moves to France.

With less clubs, there are less games. Less games mean less visibility for the home spectators and the sponsors. This means less income and less attraction. A downward spiral.

Another hot issue in the past season was the commitment to have two Swiss educated players on the court. This rule, called LAS rule, has been very much under debate since its origin. Some clubs see it as an obstacle to excellence. Lugano, Voléro, Köniz, and Sm’Aesch even sued Swiss Volley in the past. In this season Voléro was under pressure losing one of the best-of-five final games. To save their neck in set 4 of game 2, they played without Swiss players. A clear violation of the LAS rule. Voléro preferred to pay the fine: 20’000 Swiss francs. The president even showed a middle finger to the protesting Sm’Aesch fans. Another fine: ridicolous 300 Francs. The background is that the sanctions had been defined by the clubs themselves in the course of a negotiated settlement. And 20’000 francs don’t mean much to Voléro.

Played for two clubs in the same season: After Volley Köniz crashed, their top scorer Nette Pait was immediately transferred to Lugano. This happened outside of the transfer window. Another strange detail of the season.

The scandal highlights the basic weakness of the system. A strong principal is missing who has just one goal: the image of the league. A better image would attract external league sponsors and make it possible to subsidize the weaker clubs. Good governance and freedom from scandals would be another concern. Moreover, the new principal should gradually modify the licensing agreements, including an obligation to invest in more attractive gyms. Currently, the clubs play in school gyms. Spectators, TV cameras, and photographers have wall bars as background. Where is a sponsor that would like to support this?

A franchisor-franchisee system could be the solution: The principal would be a firm with own legal identity, but owned by the Association. It would act as franchisor and the clubs as franchisees. North American professional leagues or the major European football leagues are leading examples. And maybe some famous franchise firms will be attracted as sponsors: the Swiss McDonalds Volley League? How does this sound? Just kidding.

Good bye Voléro: It was nice … most of the time.

*** UPDATE *** Meanwhile Swiss Volley announced that the second from the NLB championship, Geneva, will promote to the NLA, but the first, Lucerne, won’t. Moreover, the Liechtenstein based club Galina Schaan withdrew. So the league will have eight clubs in 2018/19. ***