Volley Düdingen’s outside hitter Danielle Harbin will remember her first professional year for the rest of her life. After 15 matches she leads the Swiss top scorer ranking with 292 points – almost 20 points per match. Together with her team, the Düdingen Powercats, she also rallied through the first round of the CEV European Cup, contributing 20 spikes, 3 aces, and 3 block points to the success.

“I didn’t expect this” she tells me. “I never was a top scorer before.” 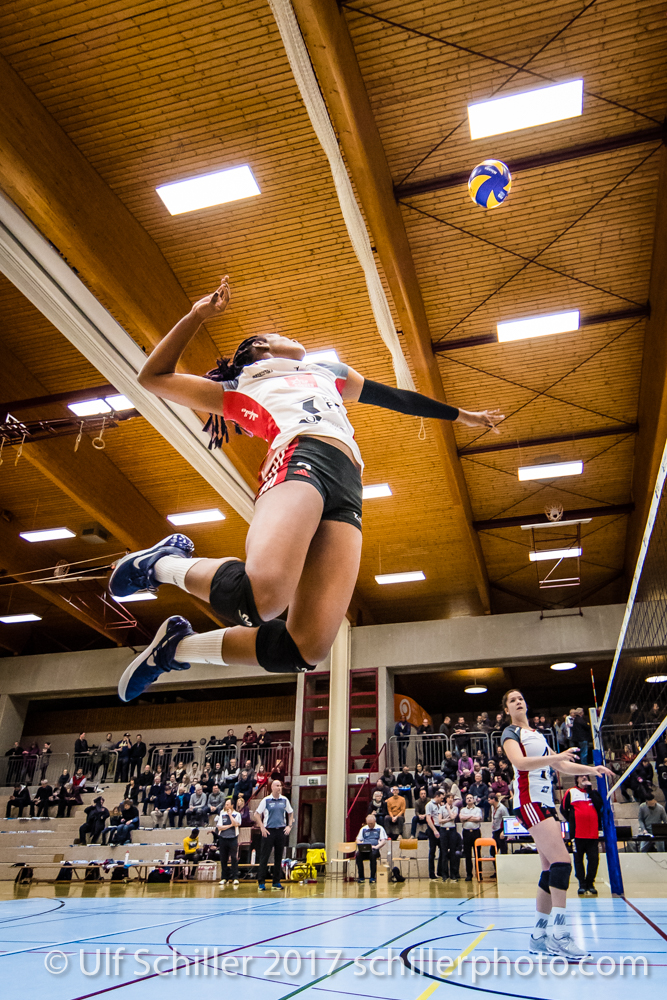 We meet and talk after the Powercats have just swept the third of the previous championship, VFM, out of the gym. Danielle is relaxed and takes her time. No superstar behavior. My interest is less in the usual after-game bla bla. Rather, I would like to know more about Danielle’s background. In particular, how did the young college player make the transition from the deep South of the United States to a small town in the provinces of Switzerland?

Growing up in Mobile Alabama, Danielle started playing basketball and volleyball. “I always wanted to be a professional volleyball player”, Danielle starts explaining. “One of our coaches at the Arkansas Razorbacks was a pro.” The coach approached a well trusted agent who set up Danielle’s profile. “The most important thing was to define my position, as I have also played on other positions before.” The file must have been convincing: Only a few weeks after it was published, Danielle received an email. It was already the ultimate offer – written by an unknown team in an unknown town in Switzerland – the Düdingen Powercats. 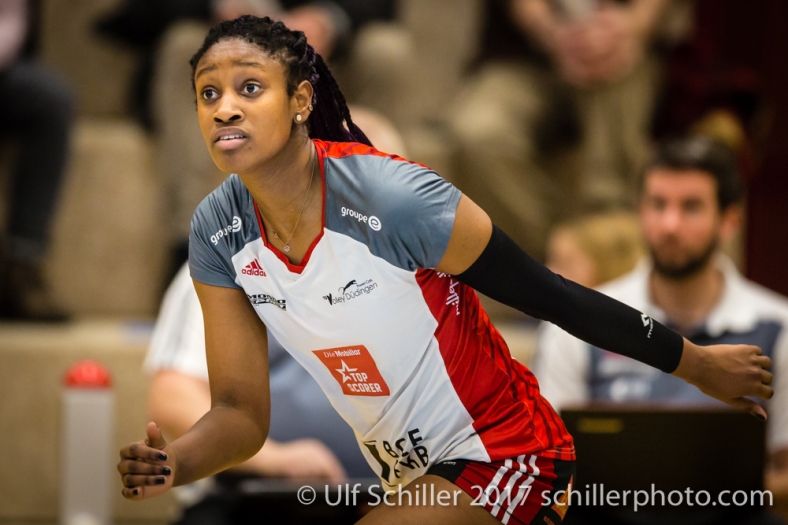 The first of three steps until she hits hard. Danielle Harbin during the match TS Volley Duedingen vs VFM on December, 16 2017 in Duedingen (Sportzentrum Leimacker), Schweiz, Photo Credit: Ulf Schiller 2017

One team member was crucial

Excitement and nervousness were great. Wow, Switzerland, was the first thought. The agent didn’t give much, but very relevant information. “It is a good offer. We can wait, as there will be more offers, but it is not likely that there will be many better offers.” The crucial information was that there is another American on the team, managed by the same agent, namely, Sabel Moffet. “With Sabel on the same team, things will be easy” was the promise.

“We have a good reputation on the US market”, explains club president Christian Marbach. “Mutual trust between our agents and us is crucial.”

Before the big adventure started for Danielle, there was another adventure ahead, though: She represented the USA at the University Games in Taipeh, Taiwan, in August. From the Games, Danielle travelled back home, then, after only two days, she headed to Switzerland.

Team around the clock

“We do a lot for the players, especially on the first days” Christian explains. “Two contact persons welcome the players. They offer help in case of any problem.”

“I arrived at Düdingen exactly on my birthday” Danielle remembers. So what was the first impression of the town, I ask her. “Cute!” is the immediate response. Düdingen reminds her of her home. A small town and volleyball important. The Powercats are visible everywhere in Düdingen. “People recognize me on the street. The Powercats mean something for them.”

“The team did everything to make it easy for me,” Danielle continues. She lives in an apartment with two other players, libera Thays Deprati and setter Zora Widmer. Even in their free time, the players stick together. Sabel plays the integrating role. She finds a lot of activities, or – in other words – she implicitly keeps the agent’s promises. The team and life: these two expressions appear identical for Danielle.

“In fact, the chemistry is right”, adds Christian. Having players with team spirit, like Sabel or captain Kristel Marbach, is ideal. “As a result, the team has a strong will. I am really proud of this team.”

I ask Danielle how life has changed. The answer is surprising at first sight, but absolutely plausible after a second thought. Despite of the completely different surroundings, things didn’t really change,. “I have more training”, Danielle replies after some thinking, “now twice a day”. So for most of the time she lives in the train – eat – sleep – repeat mode. The usual life of a professional athlete. “I don’t miss anything here”, she tells me, “my family, of course, but nothing else.”

She won’t miss the family for long. After the final match of the year against Cheseaux, she will re-unite with the family and celebrate Christmas.