Spitzenleichtathletik Luzern is another atmospheric Swiss meeting, meanwhile in its 30th year. It was another test of the Swiss elite against world class athletes. 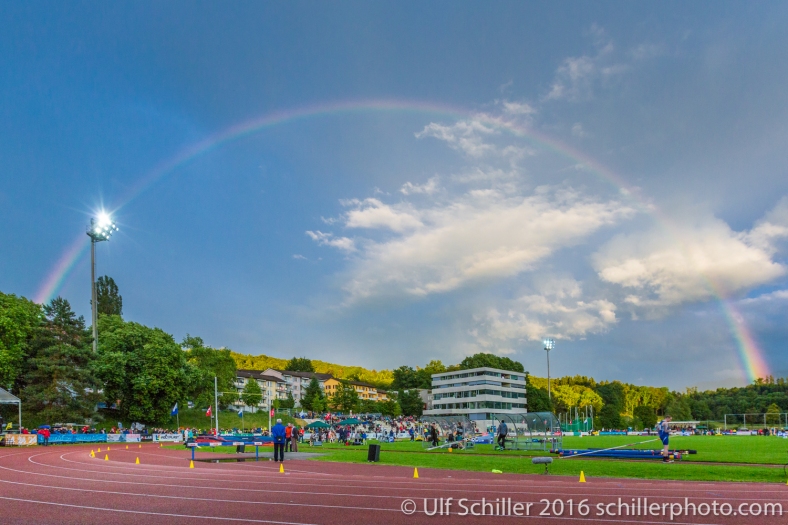 The top star of the event was Jimmy Vicaut who equalled his own European 100m record one week earlier (9.86 secs) and is currently leading the world top list. The 100m race was a drama. False start by Beejay Lee who didn’t stop running. Vicaut and Richard Kilty missed hearing the false start alarm and ran full gas to the finish line. Vicaut clocked 9.98 secs. Of course the race didn’t count and after some discussions (that stretched the regeneration period) is was repeated. 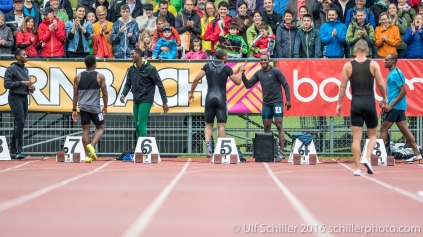 Vicaut also won the repeated race, but now “only” at 10.08 secs. There was a taint. With 9.98 secs, Vicaut would have qualified for a share of the jackpot. With 10.08 he did not. The spectators didn’t know this and cheered. And Vicaut didn’t show anger and waived into the crowd.

(The question regarding the jackpot was answered one day later. Eventually, Vicaut received “his” share. 50 percent were paid by the meeting organizers. The second half was paid by the Swiss pole vaulter Nicole Büchler who was the only athlete eglible for the jackpot. “He deserved it” she commented to me. While this is true, she deserves deepest respect.) 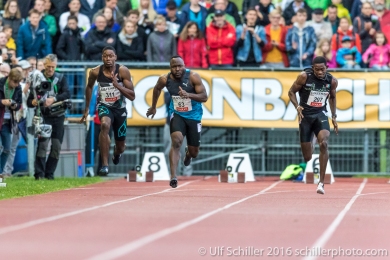 Sad that the Swiss top sprinter, Alex Wilson, didn’t meet his own expectations. 10.50secs in the same race were far from what he was hoping for. Later on the day, he even pulled his leg muscle over the 200m. You can do nothing but feel sorry and hope for speedy recovery for one of the nicest personalities on the track.

Some side blabla on sports photography: As you can see, I sat exactly on lane 5, Vicauts lane. I was there 30mins before the run. Photo colleagues are very respectful. Who takes the position first has the right to stay. Even the big agencies respect that rule. If you’re late, your photos are compromises.

Let’s turn to the women’s sprint events. Like one week earlier in Bellinzona Swiss hopes were on Mujinga Kambundji. The organisers put her on lane 5 (who was sitting there???), hoping she would win. However, like one week earlier, there was no breakthrough. Under wet and cold conditions, the second place and 11.36secs were not bad, but she is still waiting for improving to the absolute world class level. The race was won by Britains Daryll Neita in 11.30.

What do these times tell us? Well, it was cold, wet, and there was light headwind. So deduct, maybe, 2/10secs. So Mujinga shouldn’t feel too bad about her form. Which brings me to the B final that was won (in the same unfavourable weather!) by Ajla Del Ponte in a new PB of 11.52 and a new Ticino record. Despite of her nice performance, Ajla was disappointed because she missed the standard for the European Championships by just 2/100secs. (Photo blabla again: I knew how badly she wants the qualification. So this time I shot from behind the clock, knowing I would catch her eyes.)

Later on the day Mujinga ran the first 200m race of the season. She ran against 20 year young Gina Lückenkemper from Germany. Both looked good and fast, battled side by side. In the end, Gina was 1/10sec ahead, but both were happy with their race. 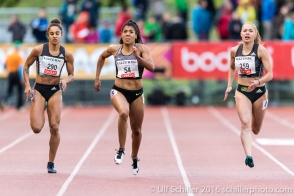 Talking about the Swiss athletes – there were three Swiss victories. First, Nicole Büchler won the pole vault under super difficult conditions. 4.70m in Lucerne qualified her for the jackpot (see above). The second Swiss vaulter, 19 year old Angelica Moser finished with 4.40m. One year ago this would have been almost a PB, this year she has a streak of 4.40s and she’s still hunting 4.50m (which she cleared indoor). The even younger Wilma Murto (FIN) jumped even higher in the indoor season and mastered the 4.50m for the first time in an outdoor competition. 4.85 vaulter Fabiana Murer from Brasil also cleared 4.50m, taking rank three. 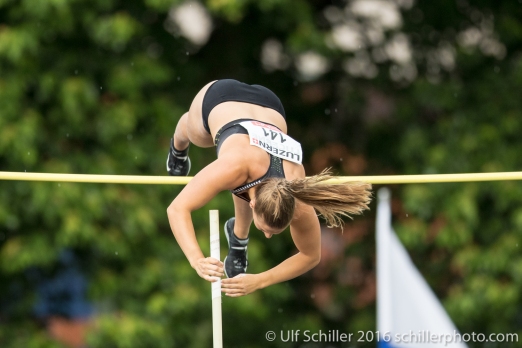 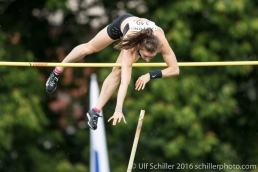 The second Swiss victory was achieved by Kariem Hussein over the 400mH. Despite of the cold, wet, windy circumstances, Kariem looked unhappy about his 49.47secs which is not the desired step forward, compared to his performance in Bellinzona one week before. Good though, he beat strong opponents, like USA’s Jeshua Andersen or Algeria’s Abdelmalik Lahoulou. 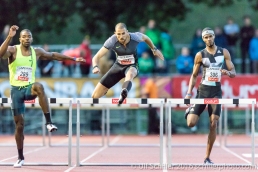 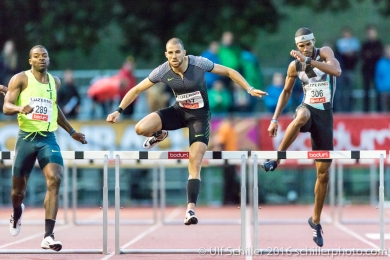 Third, there was the steeple chaser Fabienne Schlumpf who won the last race of the night. Hiding in the field for most of the race, she was the strongest on the final lap. 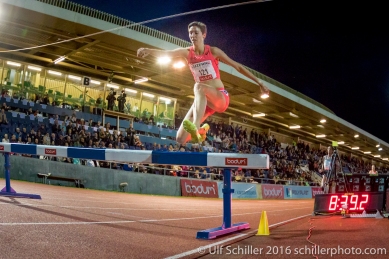 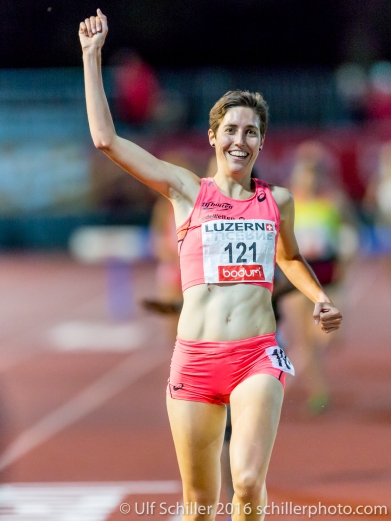 The next Swiss top starters were Selina Büchel and Lea Sprunger. Selina wanted to clock below  2 mins over 800m for the first time of the season. After 100m it was clear that this wouldn’t work. The race was sloooow – every runner played chess against the others. So it was a test of the sprinting ability. Selina came in 4th and lost 1 second to the winner, Britain’s Linsey Sharp. 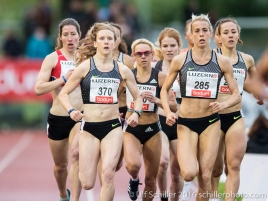 Lea Sprunger had her first race against world elite runners over the 400m hurdles. A few days after her first 54er in Geneva, expectations were high and you could feel the tension. After the first hurdles, Lea was behind her competitors, but on the finish straight she still had a lot in the tank. She felt that too and made a mistake. Instead of concentrating on the last hurdle, she started fighting between hurdles 9 and 10 which ended in a disaster. She had to do some short steps before the last obstacle, almost stood still, did a high jump over the hurdle and lost the race. She said she will learn from this. The winner, Sara Slot Petersen from Denmark clocked 55.20 – a benchmark for what would have been possible. 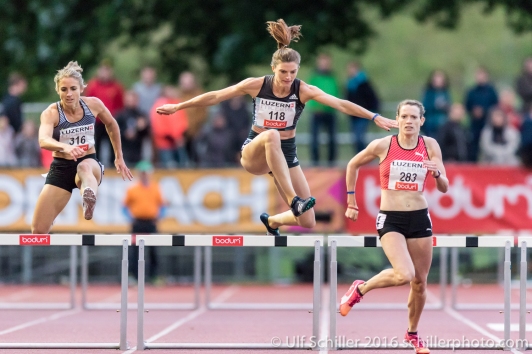